In his own words "Loneliness" brought about the formation of Windlesham Camera club, a village organisation in Bagshot, Surrey, back in 1935 when the founder, John Hayward decided to try to form an association of fellow photography enthusiasts.

They immediately got down to organising lectures and practical sessions for a membership that soon rose above 300. Not many local camera clubs of today can boast this level of support. With his Adana printing press Hayward printed regular newsletters full of useful photographic information and packed with events. 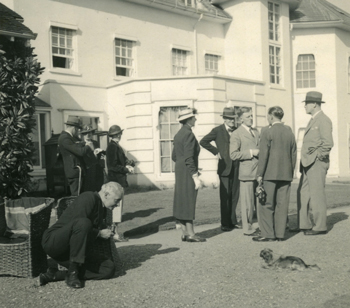 In its first year, members filmed a "Windlesham Tribute" in memory of the 1935 Coronation. This film was shown at Bagshot Park to HRH The Duke of Connaught, who had become Patron of the club, and Lady Patricia Ramsay.

Right from the word go Hayward organised exhibitions of photographic art with entries from around the world. The first Annual Exhibition, opened by the Hon. Anthony Asquith attracted over 500 entries from camera artists as far apart as New York and Budapest.

Unfortunately the war caused a curtailment of activities but, in 1948, the club re-opened and received the signal honour of an acceptance by the Princess Elizabeth of an invitation to become Patron. The Princess opened the International exhibition in Camberley in 1949. Among the club records are photographs of the princess inspecting exhibits and presenting trophies.

The Committee was honoured to be invited to visit the Princess Elizabeth at Windlesham Moor (where she resided before becoming Queen) and to take photographs there. The Club treasures a photograph showing one of the members instructing the Princess in the use of a large format camera on that occasion.

In 1950 the Club made a film for the British Red Cross Society when they recorded a 16mm. colour film of the Ceremony of the dedication of Colours at Guildford.

The Club’s eighth international Salon of photography held in Camberley was a highly successful event with over 1,000 entries, representing the work of photographers in 20 different countries.

International exhibitions continued into the early 1970s with many renowned photographers and nobility opening the exhibitions. The list of dignitaries reads like an extract from ‘Who’s Who’ – The Duke of Connaught, Hon. Anthony Asquith, The Earl of Clanwilliam, Lady Patricia Ramsey, Lord Windlesham, The Princess Elizabeth, Mr. Marcus Adams, Sir Eric Conran Smith, General Sir Robert Hanning, The Hon. Gerald Lascelles and the celebrated photographer, Baron.

A Change of Name

Following a change in the Committee the club’s name was expanded to include Camberley in its title.

2010 brought the 75th anniversary of the club’s foundation, and we celebrated with various events throughout the year. The highlight was undoubtedly a sold-out evening of talk and images from renowned landscape photographer Charlie Waite.

In spite of its enviable history, the club does not rest on its laurels or live in the past. It continues to thrive even though, in line with the times, membership has settled to a regular group of around 70 enthusiasts from the halcyon days of 300.

A full weekly programme of talks, demonstrations, and competitions is arranged covering stills photography, digital imaging and audio-visual presentations. Visits to other clubs take place throughout the season.

To a limited extent the moving image is covered with occasional programmes devoted to cine and video techniques. Many members have now developed considerable interest and experience in digital imaging and digital audio-visual presentation.

Competitions throughout the year include the usual print and projected image battles but, for variety, we also have Team Competitions, ‘Match-a-slide’ battles with other clubs, a Men vs Women contest and also Theme and Set Subject competitions.

The more popular Club visits are to steam railway events, other clubs and to photographic processing laboratories.

As a member of the Surrey Photographic Association, we benefit from the expert lecturers and Judges that tour the club circuit and the annual cycle of print and slide competitions.

We are not sure what it means for other clubs but we are often told that we are a particularly friendly club that is a pleasure to attend. This must be related to size but we think it is also due to the attention paid by members to welcoming visitors, speakers and judges as well as new members.

The Club has an elected committee comprising around 10 members who manage the day-to-day running of the club.

We look forward to continuing to build on our strong foundations in providing a meeting place for photography enthusiasts and
contributing to the wider local community.

There’s nothing to beat an evening out at a small friendly camera club. Care to join us?